Beginning his musical career as a professional touring mandolinist, virtuosic guitarist Andy Wood has crafted a two-part course designed for both aspiring mandolinists and guitarists who want to branch out into the world of mandolin. Melody, rhythm, and fills are all a big part of the mandolin player's role in a bluegrass band, and Andy teaches all three in Bluegrass Mandolin. 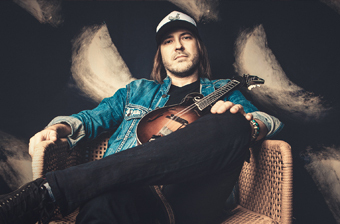 
Andy Wood is recognized as part of the forefront of this generation’s top influential guitarists. Currently touring as a solo guitarist and mandolinist, as well as working on a host of additional musical projects, Andy is also performing live with his own band promoting his latest records Junktown and Caught Between the Truth and a Lie, a double album which showcases his vast musical influences and abilities. Andy has toured professionally with a wide range of acts, including most recently Gary Allan, LOCASH, Rascal Flatts, Scott Stapp, and Sebastian Bach. Looking for an outlet for styles other than hard rock, Andy released his debut solo album, A Disconcerting Amalgam, in 2009. This instrumental record covers a broad range of genres including fusion, rock, metal, and acoustic bluegrass. Andy Wood is known for blurring the lines of preconceived genres.