Noam teaches his singular and Grammy-winning sound in this comprehensive video library of banjo lessons. He covers a wide array of styles, ranging from straight-ahead bluegrass to boundary-pushing songs and techniques he employs with Punch Brothers and as a solo artist. He breaks down 3-Finger/Scruggs, Melodic and Single String styles through hundreds of lessons, tabs and play-along tracks. 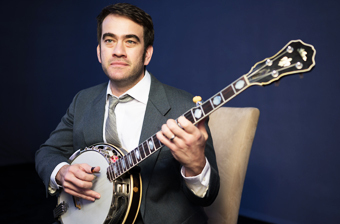 
What ultimately sets these banjo lessons apart from other offerings is the ability to submit a video for review using the ArtistWorks Video Exchange Learning® platform. Noam reviews each submission and records a video response, offering specific guidance to take your playing to the next level. All students can access the Video Exchange library and watch each other’s interactions with Noam. This library is constantly expanding and may contain the key to unlock your banjo playing skills.


Noam Pikelny has emerged as the preeminent banjoist of his generation. Hailed by the Chicago Tribune as the “pros’ top banjo picker,” Noam is a founding member of Punch Brothers, a string ensemble which The Boston Globe calls “a virtuosic revelation” and The New Yorker describes as “wide- ranging and restlessly imaginative.” In September of 2010, Pikelny was awarded the first annual Steve Martin Prize for Excellence in Banjo and Bluegrass. Noam's 2013 recording, Noam Pikelny Plays Kenny Baker Plays Bill Monroe, was described by the New York Times as "a token of reverence, a feat of translation and a show of dominion”. The album is widely considered a landmark recording in acoustic music, and was named “Album of the Year” at the 2014 International Bluegrass Music Association Awards. Noam is a two-time International Bluegrass Music Association Banjo Player of the Year and in 2019, Noam, along with his fellow Punch Brothers, were awarded the "Best Folk Album" Grammy® for their release, All Ashore. Noam makes his home in Nashville, TN and has been teaching at ArtistWorks since Spring, 2020.