Eric Marienthal has shared a wealth of musical knowledge in hundreds of jazz saxophone lessons online. Students in the jazz sax course have unlimited access to these video lessons, as well as saxophone jazz charts, backing tracks and study materials. 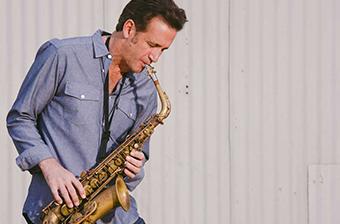 
What ultimately sets these jazz saxophone lessons online apart from other offerings is the ability to submit a video for review using the ArtistWorks Video Exchange Learning® platform. Eric reviews each submission and records a video response, offering specific guidance to take your saxophone playing to the next level. All students can access the Video Exchange library and watch each other’s interactions with Eric. This library is constantly expanding and may contain the key to unlock your playing.


Eric Marienthal is a Grammy® award winning jazz saxophone musician. He studied at the Berklee College of Music in Boston where he eventually was awarded the Berklee Distinguished Alumnus Award for outstanding achievements in contemporary music. He later became an integral member of the Chick Corea Elektric Band, where he recorded 6 albums and received 2 of his 5 Grammy nominations. He has since performed in over 80 different countries and has recorded 13 solo albums. Some of the many artists Eric has performed with include Elton John, Barbara Streisand, Billy Joel, Stevie Wonder. The online lessons here at ArtistWorks feature both alto and tenor saxophone.

+
Exercise of the Week Archive

+
Lick of the Week Archive

+
ArtistWorks Jazz Allstars - Live at the Blue Note in Napa

+
John Patitucci with Eric Marienthal - On the Road with Chick Corea: Asia Tour 2017