Dweezil Zappa is a prolific and extraordinarily inventive composer, recording artist, and performer. In this 2-section course, Dweezil provides everything guitarists need to “break out of the pentatonic box” using his unique Five Shapes of Freedom system. In the first section, Dweezil details the five shapes and goes on to show how to apply them in inventive ways in section 2. 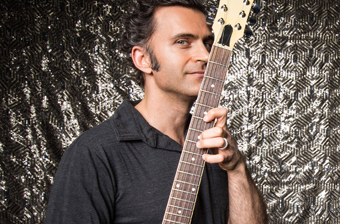 
It was inevitable that from the moment of his birth, Dweezil Zappa's life would be filled wall-to-wall with music (his father, Frank Zappa, having listed his religion as “musician” on Dweezil’s birth certificate). Having watched his father perform concerts from the side of the stage since he was in diapers, it was no surprise that he became interested in music from an early age. It wasn't until he was 12, however, that Dweezil began to show a serious interest in manipulating the guitar to make music. Having primarily heard the music his father was working on or listening to at home while growing up, Dweezil soon found himself exposed to some new sounds on the radio. Besides his father's music, he began listening to the Beatles, Queen, AC/DC, Led Zeppelin, Black Sabbath, The Who, and Jimi Hendrix. Like many aspiring guitarists of his generation, Dweezil’s ear was caught in a stranglehold by the trailblazing guitar styles of Edward Van Halen and Randy Rhoads. Unsurprisingly, Dweezil became remarkably proficient in a very short amount of time due to his breadth of musical influences and intense practice sessions.